A few weeks ago, I was walking down the street, on one of my many long walks, during which I think about many, many things. On this occasion, I was thinking about my hair, and how Nyx has been adamantly against my cutting it again. And right then, I was passing by a head shop. A guy was sitting by the side door, and he yelled to me, "You need a haircut!"

Since I'm here, I'd like to take the opportunity to invite and encourage everyone to join me in the open, distributed social networking universe, known as the fediverse. This page helps people find their Twitter friends on Mastodon servers.

Mastodon, the software, exploded in popularity early last month. Then, later in the month, news came out regarding mastodon remains that seemed to provide some indications that humans have been in the Americas for 10 times longer than was previously commonly accepted.

Today, these two toots appeared consecutively in my feed and are timestamped 3 minutes apart: 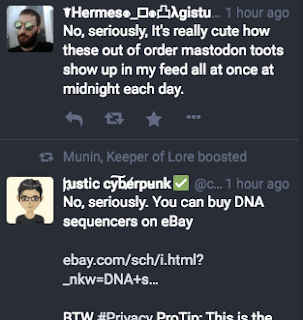